A recurring theme in shape-changing interfaces are animated objects which demonstrate an anthropomorphic body language. A fictional example can be found in the movie Immortal (Ad Vitam): a bathroom appliance which, within its sphere of influence, supports users of the bathroom both by providing them with the objects they might need (in this case, toothpaste) for a given task and by providing them emotional feedback to their current state of mind (Figure 1). Explorations which utilize anthropomorphic body language are common in HCI as well, examples include phones which might either shy away, or move towards a user’s hand in anticipation of touch [5]; a faucet which not only gives you feedback over your water usage [6], but also demonstrates behaviors such as searching, or rejection; hand-held devices which are endowed with a heartbeat to communicate their emotional state [1] etc.

A slightly different but related stream within the design of shape changing interfaces are systems used to transmit emotional states between users. These include appendages to mobile devices which have a shape that is synced between devices. If a user changes the shape of their device, the corresponding appendage of a friend or partner’s device also changes shape [3]. Other examples include breathing picture frames which sync their actions to the breath of a loved one [2], or mobile phones through which partners can poke or gently caress each other’s cheeks [4]. 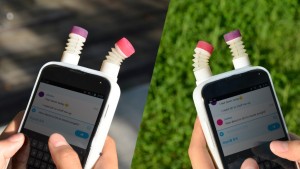